Last year I decided to start a tree farm, although in all honesty I really have no idea what I’m doing. This year I planted 500 Hybrid Chestnut trees from seed and next year I plan on planting 5000 trees. This article is about things I have learned, experiments I have done and all the stuff I learned along the way. Planting in compost vs directly in the ground

This was the biggest lesson I learned. The 30 or so seeds I planted directly in the clay soil I only got about 5 trees that came up. Those trees that came up were the ones that were on soil that was pretty steeply slanted. The other trees the seed rotted away, most likely from the continual moisture of the clay soil. The worse things for the seeds to get wet and stay wet, they really need well drained soil.

The 500 trees I planted from seed were all planted with a 50/50 mix of 3 yr old composted willow mulch and composted cow manure. This makes a nice chocolate cake textured soil that drains well with lots of nitrogen as well as cellulose. I dug a tiny hole with a screwdriver, put down 2 handfuls of soil then put the seed down on it’s flat side and then only 1 more handful of soil on top of the seed. The seed was basically level with the ground around it and the last handful of soil made it bump up a little bit. On top of that I put 2 large transfer scoops of normal woodchips that had leaves and needles in with the branches. 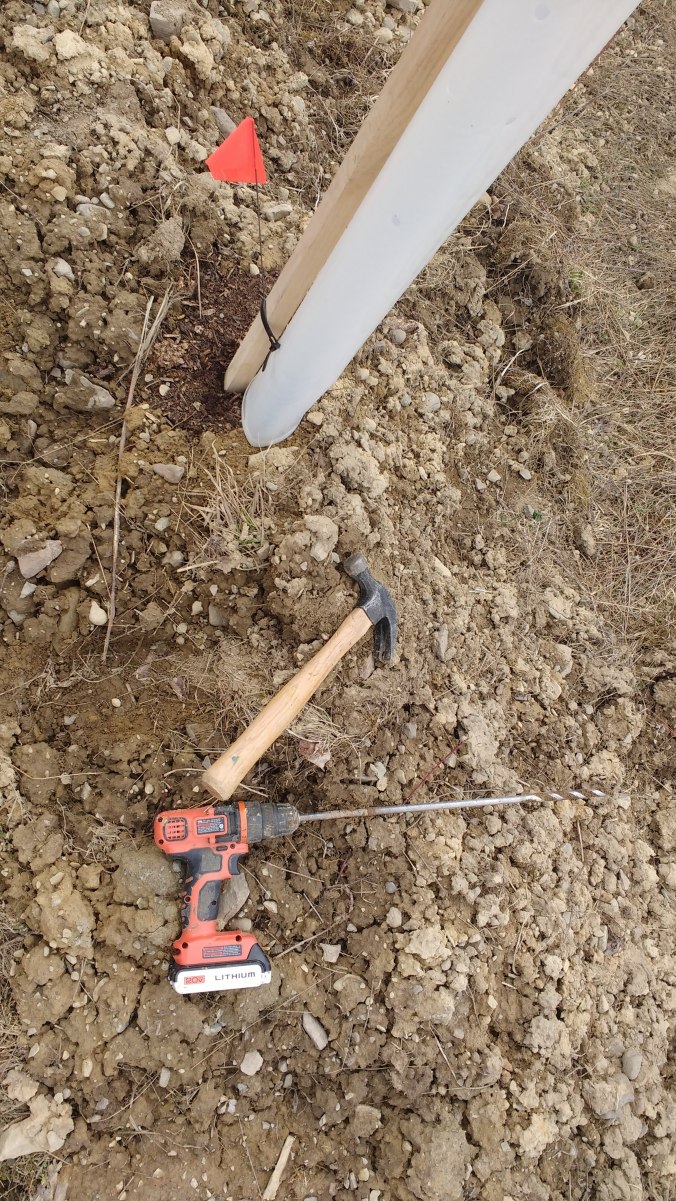 With the Ash poles I had to use a hammer which was slow, but with the White Oak I could use a steel fencepost pounder

Too much mulch can be a problem

When I put the tree tubes over the nut I added a handful of woodchips into the tube. This was a problem for the seeds if there was more than about 4-5 inches of woodchips the seedling would run out of power and turn back downward. By pulling up the tubes and removing the excess woodchips I was able to save the seedlings. Mulch is always a good thing, but too much mulch can be too much of a good thing. I think people who plant trees without mulching them are asking for trouble. Mulch helps keep the tree dry when it is too wet and wet when it is too dry and cuts down dramatically on competition right around the trees. I’ve had many trees I’ve planted and forgotten about and the grass and goldenrod have completely hidden the trees for several years, but they still survive and even thrive when they have to compete for sunlight.

Try not to plant on level ground

I’ve noticed that if the land is perfectly level and clay, the Chestnuts really struggle. They prefer a slight slope (even a degree or two) so that the water can run off. Also if you have clay soil and dig a hole to plant your seed that hole will fill with water and likely rot. It’s best to put 4 large transfer scoops of mulch down then dig a volcano hole in the middle and put in a handful of dirt or compost and then the seed and then 2 more handfuls of dirt or compost on top. That will keep the seed above the ground so it doesn’t rot. 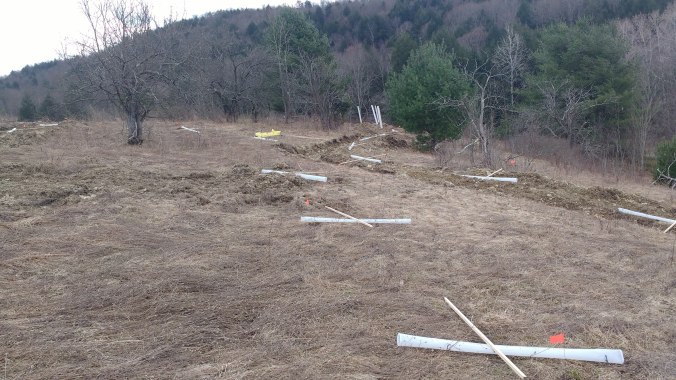 Tree tubes are the way to go

I researched a lot on tree tubes before I ended up settling on TreePro’s Miracle Tubes. I bought 500 tubes 6′ tubes which ended up being about $4 a tube shipped. I see how other people have used flat tubes or other brands and I have to say I can’t imagine using anything other than the TreePro Tubes, I am a very happy customer. The shipping company was very unprofessional and the tubes arrived pretty smashed up, but they were quick to install and easy.

Everyone I’ve talked to has said tree tubes suck. So far that has not been my experience, if that changes I’ll update this article.

Ash Stakes vs everything else

In order to use treetubes you have to use stakes. The tree tube companies sell fiberglass stakes, lots of people use electrical pvc conduit from Home improvement stores. I really didn’t want to do either of those things so I had a friend of mine who runs a lumber yard cut about 1000 ash stakes for me. Ash should last 3-4 years buried in the ground and I feel a whole lot better using wood than fiberglass or steel posts. I know if the stakes get lost in the ground and then the mower hits them I won’t destroy my equipment and environmentally it makes a whole lot more sense. If I invest in fiberglass takes what I am I going to do with 5000 fiberglass stakes when the trees are all grown up?

I ended up getting 2000 stakes from a place in PA that were white oak. They are amazing for the price (I paid about $.90 through treepro but picked them up myself). Pounding in 1000 stakes with a fence post pounder (after drilling with a 1″ 2 ft long auger bit) I’ve only broken 2 stakes.

Put the tube up when you plant the seed

The LT42e is the first lithium battery powered riding mower I’ve seen that I would consider purchasing, but at $4000 it’s not cheap

Doing it all without using a tractor

Most farmers have large tractors and it is often their prized possession. Unfortunately I think many farmers buy too much tractor for what they need and that puts them financially in a bad position. I’ve decided to farm 42 acres of trees and to try to do it without owning any heavy equipment. I have a small LA150 John Deere lawn tractor with ATV tires on it for traction, but nothing else other than electric weed whackers, hedge trimmers and chainsaws. I have custom built 2 electric wheelbarrows, a chain-drive 3000W one that is good for moving up to 500 lbs and a lower power hub motor one which maxes out at about 300 lbs. It would be nearly impossible for me to farm this much steep hilly land without using these tools.

Get help, you will need it

I also hire one of my tenants and pay him to help me out. His is an incredible worker and last week I paid him $90 in total to spread about 8000lbs of manure onto 400+ trees (two scoops each tree). Since he had to shovel it twice that means he moved 16000lbs of manure for $90 over the course of 7.5 hours. If you break that down it means it cost me about 1/2 of a cent PER LB to get the manure from a trailer directly to the tree. You would be hard pressed to find a tractor that is going to give you those kind of efficiency numbers. The tractors are insanely expensive (over $30,000 for a decent new one) and then maintenance and gas are not cheap either.

So skip the expensive nasty diesel tractor and do the work like the Amish would, the hard way. Its amazing how much work you can get done when you put your head down and just do it.